All relationships are challenging. They all involve friction and stress. They all, at times, are under pressure.

If one partner in a relationship has a stroke, that invariably puts added pressure on the relationship.

“My husband had become a nurse to take care of me,” Julia Fox Garrison said when we interviewed her while writing Identity Theft. “I couldn’t even be a wife.”

Often one or both partners, to some degree at least, is anxious about the adventure. Often the planning falls largely to one person. Adventures that take you out of your normal surroundings and routines can create anxiety for a person with disabilities, and add demands to the partner in supporting the survivor. 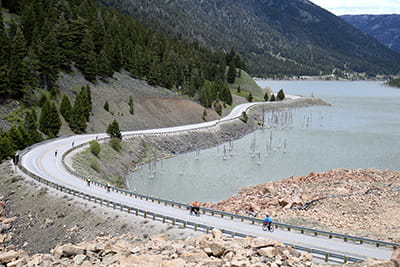 That was definitely reinforced during our recent big adventure – Stroke Across America. We rode our tandem bicycle 4,548 miles from Astoria, Oregon, to Boston, Massachusetts. We rode to raise awareness for stroke, aphasia and the critical importance of the emotional journey in recovery. We also wanted to do something we really enjoy doing together.

We had the great pleasure to be joined by four wonderful people: stroke survivor Michael Obel-Omia, who lives with aphasia; Whitney Hardy, a close family friend and traumatic brain injury survivor; and Emily Talkow and Alex Rubin, two incredible summer interns from Washington University, St. Louis. We also had a great rotating crew of support, led and organized by Arlen Hall. If interested, check out more on the team and our 3-minute Stroke Across America recap video.

The trip was amazing in so many ways. The riding was even better than we imagined – this country is spectacularly beautiful, especially when enjoyed at 12 miles per hour. Our riding team became like family.

Our 16 community events, organized with the help of incredible local stroke support allies, helped raise awareness and build communities that will help advance the work to better support stroke survivors and their families. The survivors, carepartners and stroke care professionals we met – at these events and elsewhere along the way – were inspiring. Significant media exposure created a better awareness and understanding of stroke and aphasia. We could go on. But the trip was also really stressful. It put us, and our relationship, under a lot of pressure. Because of the spasticity in her right leg and arm, Debra stretches a lot every day, especially before and after exercise. So on this trip she had to stretch for an hour before every ride, and another 45 minutes after.

She stretched that much or more on our days off from riding. It was so frustrating to Debra that this was time away from being with, and supporting, the group. Routine tasks like getting coffee and breakfast were more complicated and difficult away from our normal setup. Getting on the road by 8:30 every morning (earlier when it was really hot) created a lot of stress.

Our bike and biking gear require a lot of prep each day, putting away after rides, and periodic maintenance and repairs throughout the trip. That was more pressure on Steve.

And we weren’t just riding. We also were organizing events and trying to gain publicity to raise awareness – so we were often working in the evenings and on our rest days. Because of aphasia, it’s the kind of work that’s really difficult and frustrating for Debra. Sometimes we didn’t exactly agree on what work should be at the top of the priority list. Sparks could and did fly. Those “rest days,” about one of every five, we renamed “stressed days”! So why do it? Lots of reasons. As we wrote in our last column, cycling on a tandem has been one of the most important ways we have been able to continue doing something we both love. And it was an adventure that was at the top of Steve’s “bucket list.” It’s better for stroke survivors if their carepartners are happy too!

As it turns out, the added pressure on our relationship actually created some positives – we learned from it. Steve learned (or was reminded more frequently) that even though his even-keeled nature is generally helpful to our relationship, blowing up every once in a while didn’t break Debra. More importantly, it let her know where Steve’s head (and emotions) really were and started some conversations that helped us deepen our relationship. We learned that talking more directly about our points of friction could really help, but also that we didn’t always need to talk about them!

Even though we’ve been at this “living in recovery thing” for 12 years, the added pressure led us to create a new and really helpful tool. Recognizing that sometimes our altercations were born simply from our life-with-disabilities frustration, not from some meaningful difference, we agreed to ask each other after: “We level?”

If the answer was “yes”, we could move on, without the residual hurt that so often causes the next battle – hours or even weeks later. If the answer was “no”, we both knew to find time for a conversation about it – right then if it worked, but more frequently later on. It’s a tool we’re trying to keep in our relationship toolkit now that we’re back in a less pressured situation.

There were high-level learnings as well. The trip deepened our understanding of, and appreciation for, three things we’ve thought and talked a lot about.

Identity. It’s really not about who we are. It’s about who we want to be. It’s not about forgetting who you were before the stroke. It’s critical to give yourself permission to lament the loss from time to time – what we call a “pity party.”

There were times when Deb got super angry at having to depend on Steve – stuck on a tandem bicycle and in so many other ways. Likewise, Steve longed for the ease of waking up 45 minutes before riding time, not 2½ hours, hopping on his bike and being alone.

Our goal is to acknowledge those feelings, to move more quickly through them and focus as best as we can on “playing the hand we were dealt” to build the experiences for the life we want.

Purpose. This is so important to giving our lives meaning and driving us to do more. It’s what got Debra to finish writing Identity Theft even though her communication challenges from aphasia made that task infuriating at times.

Putting purpose into this trip made it more complicated and increased the pressure on us. But it also made it so much more meaningful. And it created so many inspiring moments. Randy Miller, a stroke survivor with aphasia, left few people with dry eyes when he said to the 150 or so attending our community event in St. Louis: “My stroke changed my life, but it won’t hold me back.”

Community. We could not have cycled across the country, let alone survived this chapter of our lives, without the support of our community – family, friends and even our extended networks.

Friends of 50 years helped organize our community events. Family and friends rode with us on several stretches, including the final week, and their presence fueled us. It reminded us just how much our community supported both of us in the immediate aftermath of Debra’s stroke, and the support they gave to Steve was equally critical. Recognizing that not every survivor has such a strong community has increased our resolve to build communities of support through our work at Stroke Onward.

Taking on projects or adventures that will knowingly put your relationship under more pressure is clearly a personal decision. Presumably, there’s plenty of pressure anyway. Since living in the aftermath of a stroke often feels like a battle, try to remember that “pressure makes diamonds,” as General George Patton told his troops during World War II.

Stroke survivor Debra Meyerson and Steve Zuckerman, her husband of 33 years and “carepartner” after stroke, founded the nonprofit Stroke Onward to help survivors, families and caregivers navigate the emotional journey to rebuild their identities and rewarding lives. As guest writers, they share their experiences and insights in their post-stroke journey.