In August we took a two-week cycling vacation with friends to explore some of the beautiful areas around Seattle. Cycling is something we’ve worked hard to keep in our lives following Debra’s stroke. For us it’s a great source of fun. We love exercising. We love being outside, especially in remote places surrounded by natural beauty. We have always loved seeing new places from a bicycle. Now, you may or may not care about cycling, or may not be able to cycle even with adaptations, but this story is about something much larger. Our cycling vacation gave us more examples of how we – a survivor and carepartner – can get frustrated when our activities are at odds with our identities. Whatever activities you pursue, we hope this story helps you reduce frustration as you rebuild identities and rewarding lives. 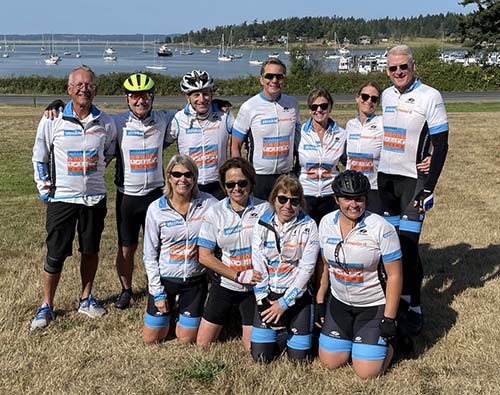 The need to adapt

About two years after her stroke, Debra was strong enough to ride, but she had no functional use of her right hand and arm. And her right leg and foot lacked the small motor control necessary for bike riding. She was glad to be exercising on a stationary bike but was frustrated when Steve was outside, and she was not. So, we thought a tandem bike could be the ticket. We borrowed one from a friend, and we were off! Well, it wasn’t such a simple adaptation. Getting ready to go out on a ride took us at least an hour, sometimes two. Debra did a ton of stretching to get ready. There were braces to put on. The bike had to be stabilized (usually leaning against our garage). Steve helped Debra onto her saddle, clipped her right shoe to the peddle and fastened a right-hand brace she wore onto the platform we had mounted on the handlebar. And then we were off. Adaptation got us on the road, but Debra’s inner voice wasn’t so impressed: “This isn’t riding. I have no control. All I see is Steve’s back. This is not who I am!” Creating a good platform for Debra’s affected hand and arm was a critical adaption to make cycling comfortable and fun.

One of Debra’s identities was bike rider, so the tandem experience conflicted with her identity. We talked about it, and she began to take on tandem rider as one of her identities. Debra increasingly let go of her frustration that every ride was a “lesser experience” because of her stroke, and the pleasure of riding together grew. We adapted once again after spasticity from the stroke caused Debra to experience cramps. Now we ride a hybrid tandem with an e-assist motor. Debra rides in a recumbent position; Steve rides upright, and the motor helps us enjoy longer rides and hillier terrain.

The cost of Identity conflict

Before her stroke, Debra wrote a book about the toll it takes on people when their company culture is at odds with their identities. She interviewed women, people of color and LBGTQ+ employees in organizations dominated by straight, white, male cultures. She wrote about the energy, anxiety and pain of struggling to maintain their sense of self and expressing important aspects of their identities – all while suppressing their identities to not “rock the boat.” While writing Identity Theft, Debra realized this “identity vs. experience” tension was at play for her too, with one very important difference. Many of the identities creating tension with her more limited capabilities weren’t core characteristics such as gender and race. She could choose to change them. She could reduce the conflict. She could be a writer and teacher through Stroke Onward, not just at Stanford. She could be a tandem rider, not a bike rider. Thinking this way helped us avoid thinking of adapted activities as “less than” what we used to do. It allowed us to more fully enjoy them.

For carepartners, adapting activities is usually more of a choice than a necessity. Steve doesn’t have to ride a tandem. He doesn’t have to ski on easier slopes. He doesn’t have to build more time in his day to help Debra with therapy exercises. Over time, such choices can lead to frustration or even resentment and relationship friction. Especially if there is also reluctance to talk about it. Steve has consciously adopted carepartner as part of his identity. That has helped him think of necessary activities for Debra as part of his life, not a sacrifice to support hers. It doesn’t make it easy, just easier. And Debra doesn’t want Steve to give up things he loves and can still do. We have made some compromises that work for us – mostly tandem riding, but an occasional “boys biking weekend” for Steve. We also find that a little time apart is good for both of us. Fortunately, Debra doesn’t need alternative care for that anymore, but early on she did.

Compromise can be hard

The toughest choice Steve has made involves his career. As the writing process for Identity Theft progressed and the vision for Stroke Onward emerged, it was clear Debra would require a great deal of support from Steve. He was eager to do what he needed to because these projects were the path for Debra to bring professional meaning and purpose back into her life. But Steve had a full-time job leading the West Coast operations for Self-Help, a nationally recognized nonprofit economic justice organization. Both the substance of the work and his leadership role were very rewarding and closely tied to his identity. Fortunately, carepartner was now also closely tied to his identity. He realized that the health justice mission of Stroke Onward could be as meaningful and rewarding as an identity as an economic justice leader. Over several years, Steve transitioned to a part-time role at Self-Help. There were times when Debra sensed resentment from Steve, and she was right. Steve missed, and still misses, aspects of his old role. And he gave that up voluntarily, in many ways for Debra. Might that create strain the relationship couldn’t bear? Or a steady dose of friction? So far so good. Steve tries to remember his choice to embrace the identity of carepartner and focus on the rewarding aspects of his choice. But like everything else in stroke recovery – and in life – the journey is the destination.

Process the voice in your head

One afternoon during our cycling vacation, we had ridden about 50 miles and had 10 more to go. We were riding slightly up hill and Debra asked whether the motor was on the low or medium setting. When Steve answered that it was on low, which made pedaling more physically demanding, Debra responded, “Put it on medium.” Steve’s inner voice quickly said: “We don’t need it. We only have 10 miles left. We’re making good time and will finish before 4 p.m. anyway.” That was Steve’s identity conflict at work. There was no reason not to turn the motor up. But it conflicted with his identity as a bike rider. Using e-assist was a concession, and the goal was to use as little as possible. Fortunately, Steve had been thinking about identity much of the day. He thought about it before answering “sure, babe.” Debra and Steve with their modified tandem on the Olympic Peninsula in the state of Washington.

That’s all Debra heard until we talked about it later. For us, that kind of conflict script frequently gets played out verbally, which usually doesn’t end well. Compromise is hard. But often what makes it hard is rooted in our views about ourselves and who we think we are. We try to remember for ourselves what we say in talks all the time: Identity is a choice.

Using identity as a lever

Our cycling evolution reinforced the power of identity for us. The experience shows how easily new and adapted activities can create frustration when they are at odds with our identities. Sometimes it’s little things. Sometimes it’s the big things that dramatically change our lives; major events can threaten our ability to look forward to what life could be, trapping us into focusing on what life no longer is. Whatever activities fill your lives, processing frustration with an identity lens can create a powerful lever for recovery. Consciously rebuilding identities around what is most important to us, while reflecting our current capabilities, has helped us reduce frustration and rebuild a rewarding life together. We hope it might help other survivors and carepartners do the same. We’d love to hear from you. If you have thoughts about this column, experiences you’d like to share, ideas for us to explore further, or input of any kind, please email us at [email protected]