After Debra’s stroke in 2010, we truly believed we’d look back years later and see her stroke and recovery as a “short blip” in our lives. At first, we thought it would be a six-month blip. Then a year. But after three years of nearly full-time rehabilitation, Debra had exhausted her medical leave at Stanford and had to give up her faculty position. She had improved dramatically, but ongoing speech challenges from aphasia made it impossible to return. Only then did we realize, and admit to ourselves, it wouldn’t be a blip at all. Our lives were forever changed. Debra began asking herself: Who am I now?

That led to five years of writing Identity Theft: Rediscovering Ourselves After Stroke, including a great deal of research into, and thinking about, what identity really is. When we speak to survivors, carepartners and others in the stroke world, we often use the Who are you? content to get people thinking about identity. We share the first question: How would you describe yourself?” Then we ask people to discuss their answers in pairs or small groups. When we come back together as a larger group, we present the rest of the slide. That’s when we usually learn that most people shared a very narrow description of themselves, often focused heavily on their single most time-consuming role in life – whether it’s professional, parental or something else. We then describe four aspects of identity that have been particularly important to us. References to some of the many scholars who pioneered this thinking are in the Identities are slide.

We all have many identities. When beginning to look forward and rebuild her life, Debra had to remember that she was more than her job at Stanford. She also was a mother, a wife, a daughter and a friend. She was an active athlete. She had to think about all the things that made her who she was.

Identities change. People are changing all the time. At the moment of Debra’s stroke, we weren’t the same people we were five years before. Debra’s stroke changed her faster, but she was changing anyway. The same was true for Steve, though much less dramatically. He had recently changed careers from finance to social justice, reflecting and creating significant shifts in many aspects of his life.

Identity is a social construct. We are who we are in the context of relationships – others give us roles, such as father, husband or workplace manager. We construct ourselves largely to fulfill those roles, and the roles we hope to play in relation to others more broadly. We can certainly choose who we spend our time with. Debra found it easiest to focus on rebuilding her life with family, her closest friends and people she met after her stroke, so she felt less need to live up to the expectations people had based on interactions before the stroke. Survivors who are not yet comfortable with their “new selves” are often inclined to self-isolate, but it’s so important to push through that temptation. And that makes the work of those offering survivor and carepartner support groups so important.

Identity is a choice. This may be the most important aspect of identity. Instead of asking who we are in our post-stroke lives, it’s been more important for us to ask who do we WANT to be. Understanding what’s possible is crucial to this question. We hit a real turning point when we began to focus on what we could control and talked about who we wanted to be – individually and together – in our new reality. To be clear, recovering all of Debra’s abilities is not something we can control, but continuing to work hard at doing so, even 10 years later, certainly is.

In thinking about these four critical aspects of identity, and how to rebuild our sense of self, two things became really important to us. 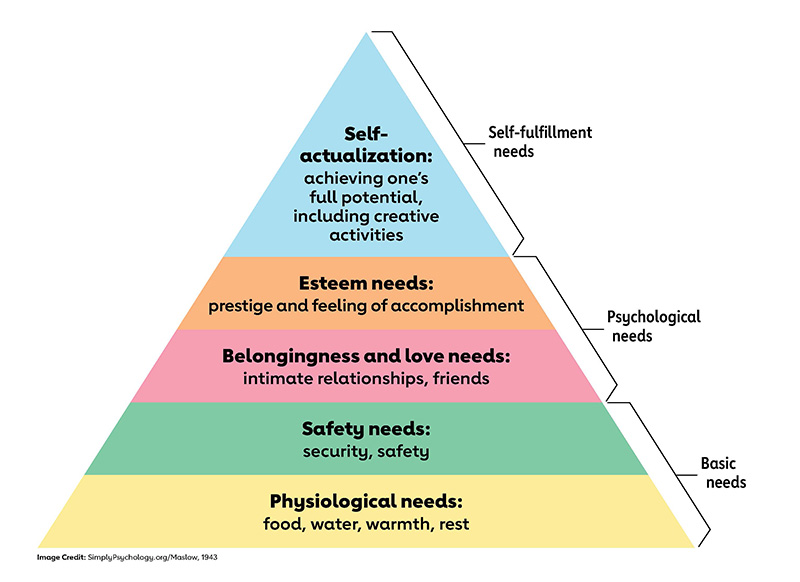 We struggled for about two months to make sure Debra survived and could be safe. Then we focused on rehab and working like crazy to regain as much of her lost capability as possible. Soon her emotional journey began. We recognized that, even with disabilities, Debra could again strive to climb Maslow’s pyramid. Fully embracing stroke survivor and carepartner as part of our identities and finding new purpose in advancing the thinking and practice of stroke recovery, has been a huge part of the process to rebuild our lives.

Identity and personal stories. Focusing on rebuilding identity can be a powerful tool for stroke survivors and carepartners. It certainly has been for us. We find ourselves drawn to a related body of work, personal stories and how we tell them. Writing Identity Theft was the process that enabled Debra to develop, and tell, her post-stroke story. But it doesn’t require writing a book. Anything that helps survivors develop and share their personal stories can be an extremely effective way to unlock the power of identity in recovery – and that will be the focus of a future column.