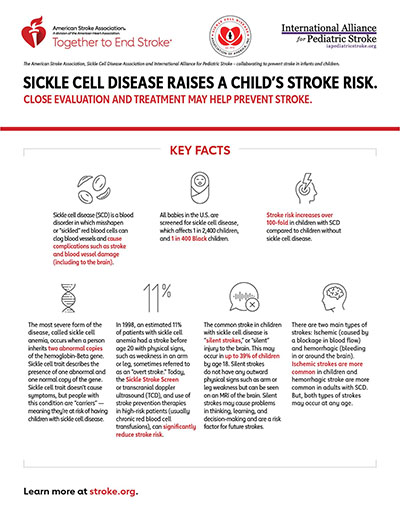 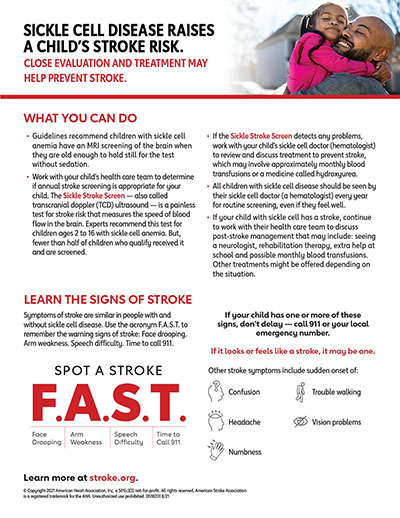 The American Stroke Association, the Sickle Cell Disease Association, and the International Alliance for Pediatric Stroke – collaborating to prevent stroke in infants and children.

Sickle cell disease (SCD) is a blood disorder in which misshapen or “sickled” red blood cells can clog blood vessels and cause complications such as stroke and blood vessel damage (including to the brain).

All babies in the U.S. are screened for sickle cell disease, which affects 1 in 2,400 children, and 1 in 400 Black children.

In 1998, an estimated 11% of patients with sickle cell anemia had a stroke before age 20 with physical signs, such as weakness in an arm or leg, sometimes referred to as an “overt stroke.” Today, the Sickle Stroke Screen or transcranial doppler ultrasound (TCD), and use of stroke prevention therapies in high-risk patients (usually chronic red blood cell transfusions), can significantly reduce stroke risk.

The common stroke in children with sickle cell disease is “silent strokes,” or “silent” injury to the brain. This may occur in up to 39% of children by age 18. Silent strokes do not have any outward physical signs such as arm or leg weakness but can be seen on an MRI of the brain. Silent strokes may cause problems in thinking, learning, and decision-making and are a risk factor for future strokes.

WHAT YOU CAN DO

Work with your child’s health care team to determine if annual stroke screening is appropriate for your child. The Sickle Stroke Screen — also called transcranial doppler (TCD) ultrasound — is a painless test for stroke risk that measures the speed of blood flow in the brain. Experts recommend this test for children ages 2 to 16 with sickle cell anemia. But, fewer than half of children who qualify received it and are screened.

LEARN THE SIGNS OF STROKE

Symptoms of stroke are similar in people with and without sickle cell disease.

Use the acronym F.A.S.T. to remember the warning signs of stroke:

Spot a Stroke F.A.S.T F face drooping A arm weakness S speech difficulty T time to call 911 If your child has one or more of these signs, don’t delay – call 911 or your local emergency number.

If it looks or feels like a stroke, it may be one.

Other stroke symptoms include sudden onset of: