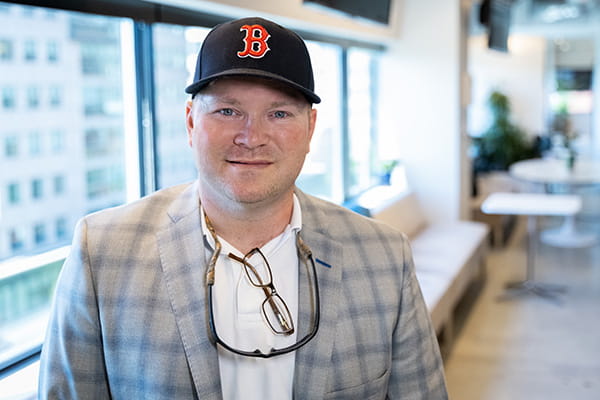 When Herbert “Hub” Miller worked as a global leader for an international agriscience company, his boss ended every meeting with a reminder of the “FAST” acronym to recognize the signs of stroke: Facial drooping. Arm weakness. Speech difficulties. Time to call 911.

“I’d sit back and think, ‘Here comes the whole FAST speech again; let’s move on,’” he recalls. “I didn’t know I’d ever use it on myself.”

In April 2021, Miller was working from home when he experienced throbbing head pain. As other symptoms began appearing, the 42-year-old remembered those meetings and checked off all the symptoms: His face was numb, his left arm drooped, and he struggled to form words.

Miller called his wife, Jan, who was out running errands, and asked her to come home. He climbed the stairs from his office in the basement of his Westfield, Indiana, home to wait for Jan outside; the moment she pulled up to the house and saw Miller, she called 911.

“He was laid out in the driveway, drenched in sweat,” she recalls.

When the ambulance arrived, the paramedics recognized the symptoms: Hub had a stroke.

In the hospital, he was immediately taken for a CT scan to determine what caused the stroke. It turned out to be a hemorrhagic stroke, a ruptured blood vessel bleeding into the brain. Miller underwent a craniotomy, a procedure that removes part of the bone from the skull to expose the brain, remove the blood and relieve the pressure on the brain.

A nurse and chaplain met Jan in the waiting room. The chaplain read Hub’s last rites and told Jan she should say her final goodbyes — his odds of surviving didn’t appear to be good.

“Most people don’t make it through [hemorrhagic stroke],” says Jan.

It wasn’t until Miller was recovering in intensive care that he understood the full impact of the stroke. It caused abnormal increases in muscle tone, pain and spasms known as spasticity, leaving him with mobility as well as cognitive challenges.

Miller spent three weeks in the hospital before he was transferred to a rehabilitation facility, where he spent an additional five weeks receiving ongoing care that included physical and occupational therapy and speech therapy.

“They would try to get me to move my left arm and my left leg and wiggle my toes and wiggle my fingers,” he says. “I couldn’t move, but we kept trying. I worked incredibly hard every day.”

Many stroke survivors experience spasticity over the first year after stroke, which may reduce their ability to do the everyday things they could before a stroke. After the stroke, Miller struggled with once-simple tasks like drawing a clock, completing a word puzzle and playing memory games. To complicate matters, he is left-handed and the stroke affected mobility on his left side, making it impossible to hold a pencil.

“Sometimes I was struggling just to write a legible answer,” he says. “I had to relearn how to write.”

Miller was working on his penmanship at the same time his youngest son was learning to write in the first grade. Miller asked the teacher to send home extra worksheets, and father and son did homework together.

Miller continues working with an occupational therapist for three hours each week and uses adaptive tools like a microphone to dictate texts and emails. He’s attended workshops for brain injury coping skills and participates in group meetings to adjust to his new normal.

He recalls being deeply frustrated with his lack of progress and low scores on testing during speech therapy. “I always made A’s in school and had the highest scores,” he says. “One day the speech therapist said… ‘Don’t worry about the perfect score today; look at the progress you’ve made in the last month.’

“It’s so important to put the right perspective on things. Practicing gratitude is really important to me, and I do that every day.”

Ipsen is a proud sponsor of the American Stroke Association’s Spasticity Education Initiative.