As a child life specialist in the emergency room of a children's hospital, Christi Eberhardt spent a Wednesday morning getting kids comfortable with their upcoming procedures. She showed them IVs and other surgical equipment.

Around midday, Eberhardt, who was 29, left the Akron, Ohio, hospital to make a phone call. She collapsed on the bridge connecting the garage to the building. Hospital security saw the fall on camera. They called in a code blue, signaling a medical emergency.

A nurse rushed outside to help. She started CPR on Eberhardt, who had gone into cardiac arrest, and yelled for an automated external defibrillator, or AED. Then, several of Eberhardt's co-workers showed up. They didn't recognize her at first. A colleague said her skin was so blue that it was "the color of Cookie Monster."

An ambulance took Eberhardt to the nearby adult hospital. She didn't have a heartbeat. A doctor suggested giving up. But a resident continued CPR and AED shocks. For over an hour, she tried to restart Eberhardt's heart. Finally, on the 13th shock, she succeeded.

Doctors put Eberhardt in a coma, creating a gentle environment for healing. This helps reduce damage to the brain and raise the chances of recovery after cardiac arrest.

Still, doctors told her family she had less than a 5% chance of waking up. If she did, she would likely have severe brain damage.

Days later, she squeezed the hand of a loved one. Her doctor cautioned that it might've been merely a reflex.

The next day, Eberhardt opened her eyes.

She blinked once for yes and twice for no. They gave her a children's alphabet board and she typed out what she remembered happening. "That's when they knew my brain function was still there," she said.

Still, Eberhardt wasn't in the clear. Her lungs, kidneys and liver were showing the strain of having been deprived of oxygen. Then there was her heart. She was diagnosed with a condition that made it more likely she'd have an irregular heartbeat, so she had surgery to implant a defibrillator, which jolts the heart back into a normal rhythm if needed.

Eberhardt went home and was doing well – so well that, 17 months later, she delivered a healthy baby girl. The next few years, she felt depressed about her heart condition. "I put on my happy face, but I just wasn't happy," she said. "My doctor said, you can be a 'woe is me' or you can make a difference." She chose the latter.

She started a support group for people in Northeast Ohio who've experienced cardiac arrest and got involved with the American Heart Association. "Sharing my story is the best healing medicine for me." Her group encouraged lawmakers to support a bill requiring high school seniors to take a CPR course before graduating. It passed.

Twelve years after she collapsed, Eberhardt got divorced. The next day, she felt anxious. Her best friend, who's a nurse, came over.

She arrived to find Eberhardt on the floor. She called 911.

The inside wall of Eberhardt's main artery in her heart had torn. This is a type of heart attack called a spontaneous coronary artery dissection, or SCAD.

In the ambulance, EMTs communicated by radio with an ER doctor. Eberhardt heard the doctor tell EMTs to hurry up.

At the hospital, Eberhardt felt intense pressure in her chest. She struggled to breathe and was sweating. As doctors prepared her for triple bypass surgery, they warned her that she might not make it. She told her loved ones goodbye.

The surgery was a success. Weeks later, a SCAD specialist diagnosed her with fibromuscular dysplasia, a condition that causes narrowing and enlargement of the body's medium-sized arteries. The enlargements are aneurysms; one of them burst when she had her SCAD.

Eberhardt gets CT scans to monitor the size of her aneurysms. Because certain movements could cause them to burst, she can't ride roller coasters or get a deep tissue massage. She also has to keep her heart rate under 120 beats per minute, so she keeps fit by walking and lifting light weights.

Now 46 – 17 years after her cardiac arrest, and five years since her divorce – she's remarried and has two stepsons. Despite everything, "she wakes up every morning with a smile," said her husband, Greg Eberhardt. "She has a great perspective."

She loves watching her 14-year-old daughter, Emily, do competitive gymnastics and cheerleading.

Despite struggles with short-term memory, she went back to school and got her board certification as a behavior analyst. She left the hospital and works with children with autism.

"Everything is fantastic now," she said. "I've turned all of this into a positive. I'm here for a reason. I like to think there's many of them. I live every day to the absolute fullest." 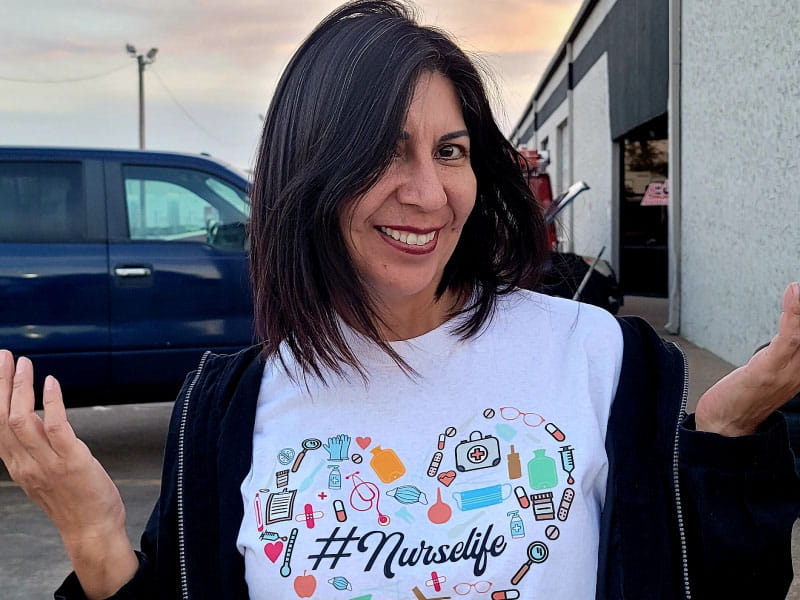