For his first 29 years, Justin Cadelago thought little about his heart. The exception was even a fun memory: he got to leave school early once a year to visit his pediatric cardiologist.

Cadelago was born with an aorta narrower than usual. This congenital heart defect is called coarctation of the bicuspid aortic valve. When Cadelago was a week old, doctors repaired the defect via open-heart surgery.

The fix involved a patch. Doctors expected him to outgrow it, and he did. Two years later, he underwent another surgery.

Cadelago's heart responded so well that as a child and a teen growing up in San Francisco, his doctor and parents said he could do any sport except heavy weightlifting. He enjoyed baseball and football, but his true passion was basketball. He was good, too.

He played for fun during college in Santa Barbara and moved to Los Angeles to start his career working for a media company.

By 29, he was living in Los Angeles, enjoying his job and a great circle of friends. He felt he'd hit his stride.

At his annual checkup, his cardiologist ordered an electrocardiogram, echocardiogram and a chest MRI.

When Cadelago showed up to get the results, a cardiac surgeon greeted him. "We're going to need to do open-heart surgery in the next three months," the doctor said.

Cadelago had another problem with his aorta. This time, it was a balloon-like bulge called an aneurysm. Doctors said the issue likely was a ramification of his congenital defect.

Cadelago was devastated. He'd assumed his childhood surgeries had "cured" him. Only later – after hearing this news from the surgeon – did he learn that his parents had been told he might develop more problems.

"It was always in the back of my mind," said his mother, Victoria Wells. "We didn't want him to feel different."

During the surgery, in August 2016, doctors were able to repair the aorta instead of replacing it. After five days in the hospital, Cadelago went home.

Family, roommates and friends helped him for the first few weeks. Doctors told him to not lift anything heavy, but also to get his body moving.

Cadelago became dedicated to the cause, walking up to 6 miles a day. Within two months, he felt back to his old, fit self.

Then his job offered him the chance to relocate to New York City, where he'd always wanted to live. He said yes.

Cadelago was excited but also anxious about his health. He even visited the emergency room a few times for accelerated heart rates. Those episodes turned out to be panic attacks.

About a year later, Cadelago was settled into New York and confident his health challenges were behind him. So he ramped up his healthy lifestyle.

He became more nutrition-minded and reduced his meat intake. Around the same time, he began boxing. He hired a trainer, worked out four days a week and found a community of fellow devotees.

In the fall of 2021, Cadelago, on the cusp of 35, switched to a 100% plant-based diet, stopped drinking alcohol and got more sleep. He felt terrific.

On Thanksgiving morning, he hit the gym, then shopped for ingredients to make vegan brownies for a holiday gathering that afternoon. Before cooking, he went to take Ollie, his Australian shepherd, for a walk.

He called for Ollie. No words came out.

It was the strangest sensation he'd ever felt.

Maybe he just needed air, he thought, tamping down his growing fear.

He went to a cafe and tried to order a coffee. Only after several tries did the clerk understand him.

"This is crazy," he thought once outside. "I need to do something."

He tossed the coffee in the trash and went to a hospital.

An MRI and CT scan showed he'd had a transient ischemic attack, or TIA, also called a mini-stroke. This is because the blockage that stops the blood going to the brain is temporary. TIAs can be a warning sign of a future stroke.

After multiple tests over the course of months, doctors could find no cause. They put Cadelago on several preventive medications.

"It was so scary because I was in great shape. I realized I had no control," he said. "I just felt so vulnerable to it happening again."

Doctors advised him to stop boxing and suggested running – slowly.

Cadelago had always found running to be unpleasant and boring, but at least it was something he could do.

The first time Cadelago reached 3 miles, he felt the "runner's high" he'd heard about. He was hooked.

Running became his release, easing his fear and anxiety.

"Running really helped shape the next year of my life into a story of gratitude rather than victimhood," he said.

Buoyed by the exercise and the connections he'd made in the running community, Cadelago set his sights on a marathon. He expanded that to three marathons in one year in each place he'd called home: San Francisco, Los Angeles and New York.

He started with a half marathon in Miami in February. In March, he ran his first full marathon in Los Angeles. The San Francisco marathon followed in July. He ran another half marathon in October on Staten Island. Then came the biggie: the New York City marathon in November, on the American Heart Association's team as part of the event's charity partner program.

When Cadelago crossed the finish line in Central Park, he fell to his hands and knees and sobbed.

"It just all kind of hit me, this entire year," he said.

Cadelago now sees his health conditions as his "superpower."

"It's accelerated my wellness journey and allowed me to experience things in ways I wouldn't have," he said. "Because I allow myself to be vulnerable, people trust me and identify with me. That's allowed me to help people and to be helped by others."

Wells, his mother, said the mini-stroke has reawakened her son, personally and professionally.

"It made him reevaluate his life and what he's here for," she said. "He's more authentic and committed to making a difference." 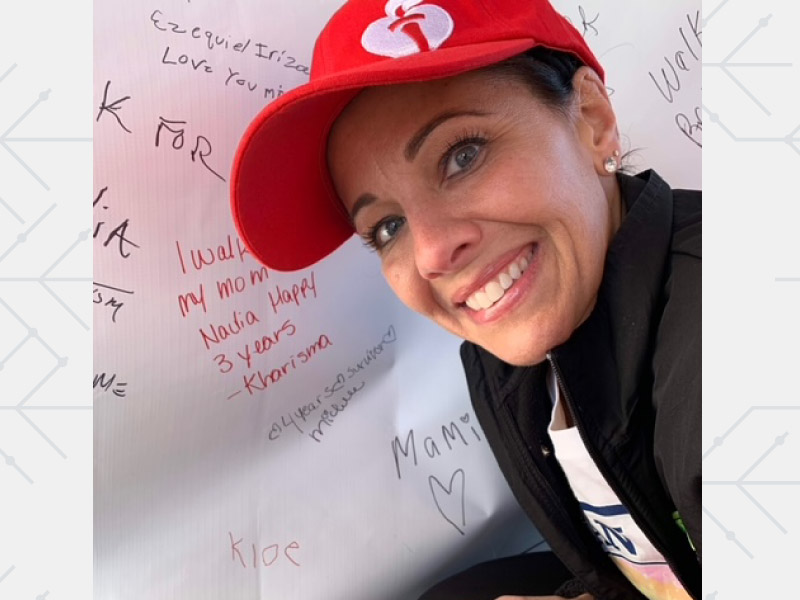 After stroke, heart surgery and heart attack, runner vows to reclaim her strength Her 2-year-old niece noticed something wrong during a video chat. It was a mini-stroke.