A week after Christopher Holton got a clean bill of health from his doctor at his annual physical, he set out for his daily walk on a wooded trail near home.

Holton, a 52-year-old former youth football league coach and multiple-mile-a-day walker, meandered along the paved trail in Mechanicsville, Maryland, that's popular with runners and cyclists. Most days he walks with friends. That Saturday last August, his buddies were busy.

Holton powered along the path at his usual brisk pace, then started walking back to his car. He'd parked it at a nearby senior center.

Bryan Buckley also was out that morning cycling the trail for the first time with his friend Isang Isang. As Buckley pedaled along the path, Isang saw a man up ahead wobble, then collapse. It was Holton.

"We sped up and jumped off our bikes," said Buckley, a public health researcher with emergency training from his days as a lifeguard.

Buckley rubbed Holton's back. He didn't respond. He was bleeding from the lip, and his hand was shaking. Buckley told Isang to call 911.

As they waited for the ambulance to arrive, Holton started gasping for air and his eyes began to glaze over.

"Then there's this moment where he gives one really big gasp," Buckley said. "It looked like his last one."

Buckley already had been monitoring Holton's pulse by keeping a finger on his wrist. At this point, it faded. Buckley started the stopwatch function on his smartwatch, then began giving chest compressions. The timer was important because once paramedics arrived, he could tell them how long he'd been at it.

Meanwhile, a crowd had gathered, including a woman who said she knew CPR. Buckley asked her to train any onlookers willing to help. Once Buckley tired, one of the onlookers subbed in. Several of them continued that way for 20 minutes until help arrived.

The ambulance pulled up and paramedics rushed to Holton's side. "It was this moment of relief that finally help is here," Buckley said. "I thought to myself, 'Survive, sir!'"

EMS workers used an automated external defibrillator, or AED, to shock Holton's heart to get it working again. It wasn't clear if it worked. They loaded him into the ambulance and drove away.

Buckley and Isang finished their ride, cycling in silence. They wondered if Holton was OK. Buckley felt emotional about the experience and called his wife and mother. He thought he'd just seen someone die.

"It was a really sad evening," he said.

The next week, Buckley got a call from a rescue squad officer. Holton was alive, the officer told him.

"I was just overjoyed," Buckley said.

Holton was still in the hospital trying to piece together what happened. Even now, all he remembers is leaving his house and then finding himself in a hospital bed.

"When I woke up in the ICU, I was heavily sedated and I didn't know how many days I'd been there," Holton said. It was 14.

In the hospital, doctors found no blockages in Holton's heart. The cause of his cardiac arrest on the trail was a mystery. He spent another two weeks in a nearby hospital where doctors implanted a defibrillator. If his heart again stops or goes into an unstable rhythm, the device can correct it.

"To this day, we really don't know what happened," Holton said. "I am really, truly thankful that Bryan and Isang were there. I felt like I still had a lot of life to live."

He's grateful he'll be around to see his 18-year-old son and 14-year-old daughter grow up.

Holton came home the first week of October. In January, the rescue squad officer who'd been keeping Buckley informed arranged for the survivor and lifesaver to connect via a video call.

"It was amazing," Buckley said. "There are very few people I can banter with in life. Chris is one of those people, and he opens up part of my personality. We bonded immediately. It was just beautiful."

In mid-February, the two men met in person when Buckley and Isang received the Mechanicsville Volunteer Rescue Squad Life Saving Award for their efforts.

Now, Holton is back to his regular trail walks. He has regular appointments with his cardiologist to keep tabs on his heart. He credits his quick recovery to his active lifestyle.

Holton and Buckley have kept in touch, too, texting during March Madness and sharing messages every few weeks. Since that day on the trail, Buckley – a regional board member for the American Heart Association – is adamant that everyone should learn CPR. He convinced several family members to sign up for a training course. The experience on the trail also gave him a fresh perspective on life.

"There were things I was afraid to do, or hesitating to do," Buckley said. "But life is too short."

Since helping Holton, Buckley started a life coaching business and he's getting his EMBA.

"I've always had the drive to make a large impact in the world," Buckley said. "But this experience made me more focused. It taught me the difference that a collective of people can make in the moment. It was a team sport in many ways."

If you have questions or comments about this American Heart Association News story, please email editor@heart.org. 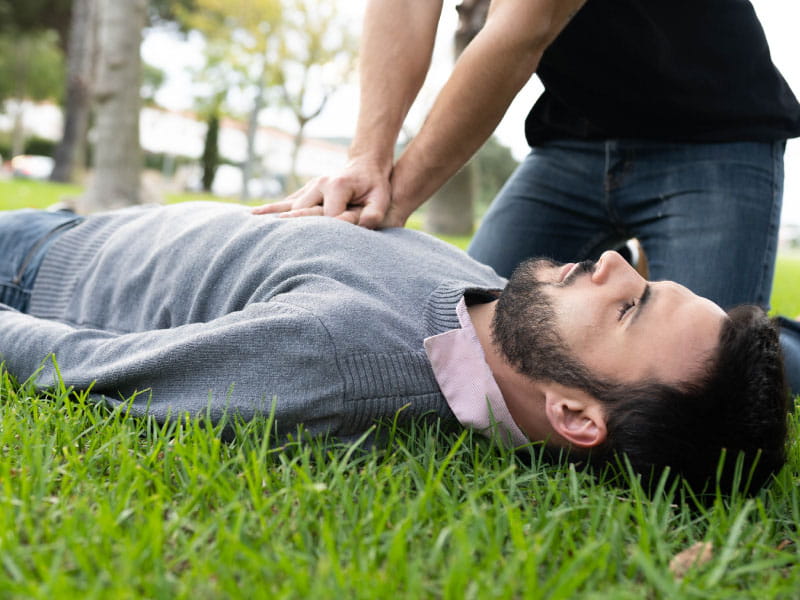