On the screen, bananas are a menace. Just ask Charlie Chaplin, Bugs Bunny or anyone who's played Mario Kart.

In your diet, though, bananas can be a boon. Experts have a bunch of reasons to like them and see only a few ways the elongated yellow fruit could cause your health to slip.

"They're rich in nutrients and fiber," said Colleen Spees, associate professor of medical dietetics at Ohio State University Medical Center in Columbus. "They're delicious. They're inexpensive. They're all the right things."

They're the world's most popular fruit and have been cultivated for perhaps 10,000 years. Some scholars think the tempting fruit in the Biblical Garden of Eden sounds more like a banana than an apple. Bananas turn up in religious traditions from around the world.

Whatever you call them, bananas are noted for being a good source of potassium, Spees said. According to the U.S. Department of Agriculture, one medium banana provides 375 milligrams. That's about 11% of the recommended daily potassium for a man and 16% for a woman.

"Potassium is a mineral that is vital for heart health, especially in terms of blood pressure management," Spees said. (It's true other foods – including lima beans and beet greens – are higher in potassium, she said, "but how many people are eating the greens of beets?") Bananas also are a source of magnesium (32 mg), beneficial phytochemicals and antioxidants.

One medium banana, which contains 113 calories, also has about 5 grams of total dietary fiber, which helps people feel full. And the fiber in bananas has "really interesting" qualities, Spees said.

Unripe and slightly unripe bananas contain resistant starch, which serves as prebiotic fiber. These indigestible prebiotics serve as food for probiotics, the "good" microbes that live in the gut. These beneficial gut bacteria are essential for digestion and have been linked to immunity, brain health and more.

As a banana ripens, the resistant starch is broken down into natural sugars, Spees said. "That's why a riper banana is a little bit sweeter than a slightly unripe banana."

Although bananas, like most fruit, can be part of a healthy dietary pattern for people with uncontrolled diabetes, a medium banana has about 26 grams of carbohydrates, which must be a consideration for people on strict diets.

People with late-stage kidney failure need to closely monitor potassium consumption. Foods high in potassium also can interfere with some medications for high blood pressure and heart failure. It certainly would take more than one banana to raise potassium levels to a dangerous level for the average person, Spees said. But she recommends anyone with medical conditions or concerns check with their primary care physician to see if bananas are safe for them.

What's problematic, though, is to assume slipping them into a banana split or banana bread makes those desserts healthy, she said. The same can be said for banana chips.

"Most banana chips are actually dried and fried," Spees said. "And some of them are coated with either an oil or a syrup that then contributes a significant source of added sugars, calories and fats."

But bananas work well at thickening and sweetening smoothies, Spees said. "If you're mixing a frozen banana with, say, Greek yogurt, frozen berries and other healthy ingredients, that's great."

Part of the banana's beauty, she said, is its convenience. In the morning, it can be sliced and added to whole-wheat cereal. Later in the day, "it's a great snack." Some people enjoy bananas with nut butters or mixed with yogurt.

So at the end of the day, for most people, her tally firmly favors the banana. Spees supports the idea of eating a rainbow of fruits and vegetables and said "absolutely, bananas fit in that rainbow." 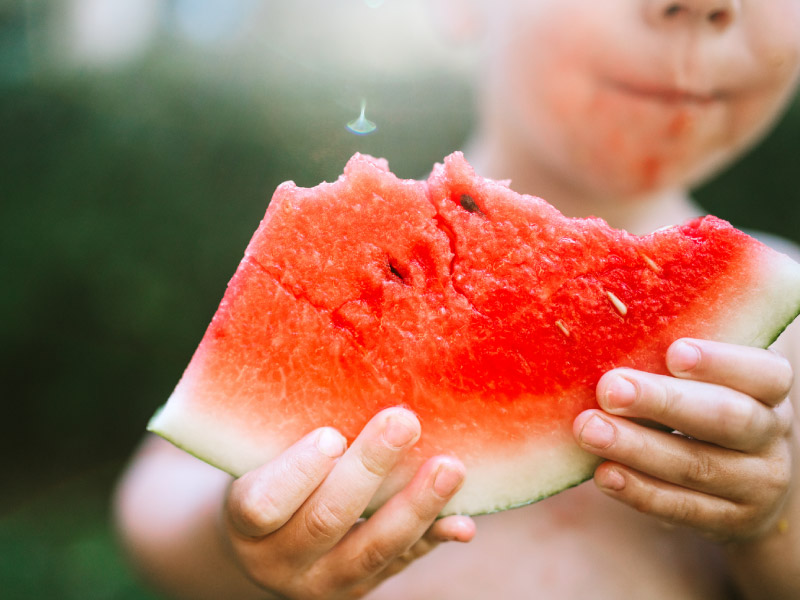 Watermelon is a summertime staple. But what's hidden behind the sweetness? Is mango the luscious superhero of fruit?