PHILADELPHIA – American Heart Association president Dr. Robert Harrington used his Presidential Address at Scientific Sessions to spotlight the two pillars of his career: clinical trials and supporting the next generation of researchers.

He titled his speech "Evidence Matters," a phrase served as a drumbeat throughout his presentation on Sunday during day two of the organization's flagship conference.

"Evidence matters in basic discovery science and in the translation of science from the bench to the bedside and then to the community," said Harrington, chairman of the department of medicine at Stanford University School of Medicine in California.

"Evidence affects the quality of the care we provide, and it supports our advocacy for improvements in health policy. It's highly motivating to get up every morning knowing that we are part of one of the most important pursuits that humans can undertake – the search for truth," he said.

Recalling his early days as a cardiology fellow at Duke University, Harrington mentioned how much he valued "the chance to pursue clinical questions in a supportive environment." There, he learned how to construct large-scale randomized clinical trials and how to implement them with hundreds of collaborators, sometimes around the world.

"It was thrilling to learn about the clinical investigation of new drugs, and to see those drugs make enough of a difference for patients that they're still in clinical use today," he said. "An essential lesson I learned was that simplicity in integrating research into practice settings was key to making these trials happen."

Harrington marveled at the potential of research in this era of "big data, where it is estimated that medical data doubles every 73 days." Some studies he pointed to as benefiting from such technology include the ADAPTABLE trial, Sweden's Randomized Registry Trial, Project Baseline, the Apple Heart Study and "Research Goes Red," a partnership among the AHA, Verily and Project Baseline.

"Different as they are, these examples share a common theme – vast amounts of data alone don't provide answers, but the evidence gleaned from analyzing data matters," he said.

Harrington also discussed the importance of the right mix of people producing evidence. In seeking a diverse workforce, he discussed two groups that especially resonate to him: women and first-generation medical students.

As the son of a single mother with a sister, wife, four daughters and two granddaughters, Harrington is dismayed that a dozen states have fewer than 10 female cardiologists.

As the first person in his family not only to go to medical school but also college, he's aware of the challenges. He's become a mentor to students from both groups. Speaking to others who've had similar experiences, Harrington said, "I hope those of you who've walked this sometimes-lonely path will share your time and expertise with these students and trainees. Sharing your story is a way of making another kind of evidence matter."

Harrington paused several times during the speech to poll the audience.

His text-to-respond questions included asking about the top source of research funding and whether clinicians have changed their practice based on a single clinical trial. The crowd also contributed the names of clinical trials that upended conventional wisdom to form a word cloud.

The final interactive piece was a word cloud built from the question, "What excites you most about the future of cardiovascular medicine?"

"Sure, we have challenges," Harrington said as answers filled in on massive screens in the room. "But every generation has challenges. What makes our opportunity so spectacular is that we have unprecedented ways to gather data and to generate insights at a scale and speed our predecessors dreamed about.

"I believe in our future because I believe in everyone, everywhere who is creating it. Together, we will provide the curiosity to raise the right questions, the passion to find the answers, the willingness to publish and speak the truth to decision-makers, and we'll do it through an equity lens." 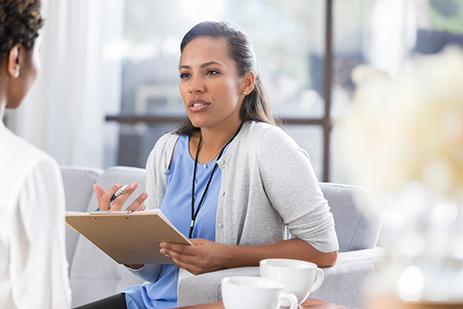 Calum MacRae: The man behind the $75 million bid to wipe out coronary heart disease