After correctly spelling the first word given to her at an eighth-grade spelling bee, Emma Baker walked back to her seat, sat down and promptly collapsed onto the shoulder of another young contestant.

Emma was in cardiac arrest.

The mother of another student was in the audience and happened to be an EMT. She immediately rushed to Emma’s aid. So did her school principal, a former firefighter. The two administered CPR until paramedics arrived to continue the rescue efforts, including using an AED to shock her heart.

Emma’s mom, Cate, was in Atlanta on business that day in January 2013. She was in her hotel room and had been texting with her daughter, who was excited about the spelling bee.

“Then, 15 minutes after texting with Emma, I get a phone call,” she said. “Her vice principal says, 'Cate, there’s been an incident.’ And I said, 'What did Emma do?’”

At that point, the vice principal explained that Emma hadn’t done anything wrong but was in medical distress. He asked Cate several questions about her daughter’s health history.

But, Cate said, he left out some big details.

Cate contacted her company, which immediately put her on a private plane back home to Kansas. Emma went into a coma after the cardiac arrest.

“The doctors said there’s going to be major organ damage for her not having a heartbeat for 45 minutes,” Cate said. “They told us that if Emma did wake up, that she wouldn’t be the same Emma.”

Doctors also told the family that she would have to learn many things all over again, even simple tasks like eating.

This proved to be the low point because, soon enough, things reversed course and began heading in a more positive direction.

“The first thing I remember,” said Emma, now 19, “is waking up in the hospital and them telling me I had to go to therapy.”

Cate knew things were going to be OK when the doctor told Emma she had to learn how to eat again, and she asked for french fries.

She chewed and swallowed them like any hungry teenager.

Other doctors would subsequently reach the same prognosis as Emma defied the odds.

A cardiologist told the family that Emma’s cardiac arrest was caused by catecholaminergic polymorphic ventricular tachycardia, a heart disease that has been linked to sudden infant death syndrome. The condition is characterized by an abnormal heartbeat, also known as an arrhythmia, that can be triggered by excessive physical activity or emotional stress.

An estimated 6,000 to 8,000 people under age 18 – and about 350,000 people in the U.S. overall – suffer cardiac arrests outside of hospitals each year. About one in 10 survives. However, their chances of survival can double or even triple if they receive CPR.

That’s why the Bakers have been active in spreading the word about Hands-Only CPR, promoting the lifesaving technique at schools, festivals and more. Hands-Only CPR requires only two steps: If you see a teen or adult collapse, call 911, then push hard and fast in the center of the chest, preferably to the beat of the disco song “Stayin’ Alive,” until help arrives.

Emma also encouraged her state legislators to make CPR training a mandatory requirement for high school graduation. In December, a unanimous vote of the Kansas Board of Education made it the 38th state to require CPR training in school. 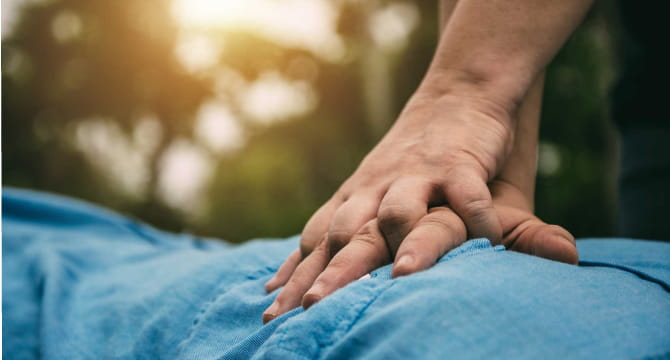 Understand Your Risk for Arrhythmia