Keidryn Nimsgern’s heart stopped when she was riding in her boyfriend’s car while the two ran errands in a suburb of Madison, Wisconsin. Jake Suter had never called 911 before that frightening day a year ago.

Today, they are both grateful there was a dispatcher trained to give instructions in CPR on the other end of the line. But not every distraught caller dialing for emergency help can find the same kind of help. There is no uniform standard or training across the country.

Kentucky became the first state recently to pass legislation ensuring all 911 dispatchers in the state can give CPR instructions over the phone that adhere to national guidelines. Wisconsin quickly followed, and a similar measure is on the governor’s desk in Louisiana, awaiting his signature.

More than 356,000 sudden cardiac arrests happen outside of hospitals in the United States each year, and only about 10 percent of these people survive. Without quick intervention – CPR and the use of an automated external defibrillator – death can happen quickly.

“They were so good,” Suter, 27, said of the dispatcher who answered his call on May 13, 2017. “They kept me calm and talked me through every step. … I’d never done CPR before and had never been trained. They were able to move me through it. If they wouldn’t have been able to do that, I don’t know what would have happened.”

Dispatchers are the much-needed lifeline in the time it takes emergency workers to rush to the scene, said Dr. Michael Kurz, an associate professor of emergency medicine at the University of Alabama School of Medicine. When bystander CPR is administered, studies have shown it can double or triple the chances of survival.

“The public assumes if they call 911 they are going to get CPR instructions,” said Kurz, who chairs an American Heart Association task force about telephone CPR. But a nationwide survey in 2010 showed that nearly half the nation’s emergency operators don’t offer telephone CPR.

“Medical dispatch across the United States is anything but uniform. We have a patchwork of municipalities, police, fire and hospitals that handle emergency calls,” he said. But “these instructions are essential. Not providing telephone CPR causes preventable harm and can result directly in death.”

In the minutes before she lost consciousness, Nimsgern remembers joking with Suter about her prowess on the soccer field. Then, she remembers waking up in the hospital, where she spent nearly two weeks. The 26-year-old has been diagnosed with a heart rhythm condition and now has an implantable defibrillator to shock her heart back to a normal beat should a dangerous rhythm occur.

She and Suter testified before a Wisconsin state senate committee earlier this year in support of telephone-assisted CPR.

“I didn’t even realize that it’s not a law and that not all dispatchers are trained to know CPR,” Nimsgern said. “Without that dispatcher, I might not be here today, or my brain function would be totally different than it is today.”

“We know how lucky we were and how it could have gone without it,” Suter said. “Knowing CPR yourself or having someone who knows talk you through it gives you a fighting chance while you wait for first responders to take over.”

In the year since Nimsgern’s cardiac arrest, the couple has made some big life decisions.

Suter, who played hockey in college and professionally, has been coaching for two years and plans to take over the hockey rink in the hometown where he and Nimsgern grew up. She decided to lower her stress and left her career as a school counselor to work in real estate.

Their biggest decision? Suter popped the question this past December during a sunset on a beach in Florida. 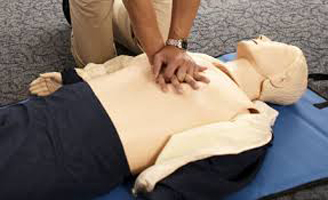