DALLAS – American Heart Association president John Warner went into cardiac arrest during the heart attack he suffered last month, his heart stopping for several minutes until an impromptu team of rescuers brought him back to life.

Warner’s heart attack made headlines, but the details of his episode are being reported for the first time by American Heart Association News. He chose to make his private story public in hopes of furthering awareness about the “chain of survival” that saved him: people nearby knowing how to give CPR, his hotel having an AED and his rapid transport by EMTs to a hospital staff that rushed him into a catheterization lab to open the clogged artery that started it all.

“If any of those things didn’t happen exactly as they did, I wouldn’t have been alive to celebrate Christmas with my family,” said Warner, a 52-year-old interventional cardiologist and the CEO of UT Southwestern Hospitals in Dallas.

Warner is halfway through a yearlong term as the volunteer leader of the AHA, the nation’s oldest and largest organization fighting heart disease and stroke, the top two killers in the world. His cardiac event occurred in Anaheim, California, while he was attending Scientific Sessions, the organization’s largest annual gathering of cardiovascular professionals.

At 6:40 a.m. on Nov. 13, Warner was in his hotel room after leading off a CycleNation spin class when he leaned on his bed for a brief rest. His wife, Lisa, was putting on makeup when she heard a wheezing sound. When she rushed to him, his eyes were frozen open and he couldn’t respond to her.

She called the hotel operator for help and screamed for her kids, 21-year-old Jacob and 17-year-old Lauren.

They saw John take a last breath and his face turn blue.

Jacob and Lisa ran down the hall screaming for a doctor. Left alone with her father, Lauren remembered an AHA Hands-Only CPR training video she watched (at a National Charity League meeting) three years before. She practiced giving chest compressions on a manikin that day, and she remembered learning that the beat of the song “Stayin’ Alive” was the right speed for those compressions.

A few doors down, Dr. Tia Raymond – a pediatric cardiologist in the intensive care unit at Medical City Children’s Hospital in Dallas – was awakened by Jacob’s shouting. She followed him and Lisa to their suite, trailed shortly by her roommate, Janie Garza, a nurse who works for the Sarah Cannon Research Institute at Medical City.

Raymond and Garza are longtime CPR partners and have had lots of practice at giving high-quality, expert CPR, although this was the first time they’d tried saving a life together outside of a hospital. Raymond also knew Warner: he’s her mother-in-law’s cardiologist.

Kodie Hartman, a hotel security guard, soon joined the CPR team. Minutes later, another hotel worker brought an automated external defibrillator, or AED, a machine that can shock a stopped heart back into rhythm.

The first jolt didn’t work, a devastating blow for the caregivers because they knew that meant his odds of survival had plummeted. But they didn’t give up. They resumed CPR and defibrillated again – a second jolt.

Garza said Warner looked blue when she arrived and even bluer after the first jolt. His color improved after the second jolt, and the AED’s internal computer advised them to continue CPR, but didn’t suggest a third shock was needed.

Garza was delivering a rescue breath when Warner reached up to push her away. Raymond felt for a pulse.

“It was booming,” she said.

Paramedics took Warner to University of California, Irvine Medical Center, where Dr. Pranav Patel cleared the coronary artery blockage by inserting a stent via a catheterization procedure. It’s a technique Warner has performed thousands of times.

Warner had a fully blocked artery in the back of his heart. An accumulation of plaque created a partial blockage and a blood clot formed on top of it. The blockage – a plumbing problem, essentially – led to a heart attack, and to an electrical problem, which was the cardiac arrest.

Warner is back at work at UT Southwestern and back in his AHA role as well. He’s also a patient in cardiac rehabilitation every Monday, Wednesday and Thursday.

While it’s natural to suspect the president of the AHA got special treatment, the reality is that his life was saved largely by a system the AHA has worked for decades to enable in communities through the country to save anyone – and some good luck.

-- His family never travels with him on business, but made this exception because he had a starring role at a major event. They weren’t even supposed to be in the room at the time his heart stopped. They were running late for a ride to visit Pepperdine, so Lauren was there to step up and use what she’d learned about CPR.

-- Raymond, Garza and Hartman knew how to deliver very high-quality CPR and happened to be nearby.

-- The hotel had an AED and delivered it right away.

-- EMTs got him to a hospital qualified to deliver the care he needed, and it happened to be only 2.7 miles away.

-- Patel and his team assembled quickly to provide the procedure.

The day before Warner’s medical drama, he delivered a speech in which he talked about there being “no old men” in his family. His father and grandfather both had heart bypass operations in their 60s, so he knew it could eventually happen to him, too. In the speech, he mentioned the need for more research to unravel the mysteries of why members of families such as his might be at higher risk or if they have unique risk factors.

Yet now, in his early 50s – despite all he’d done to monitor his health in hopes of avoiding the fate of his father and grandfather – Warner is among the 92 million Americans living with cardiovascular disease or the after-effects of stroke.

And it can happen anywhere at any time, which is why Warner encourages everyone to learn CPR. He also supports the push for CPR training to be mandatory for high school graduation; many states have it, but not all.

“Knowing CPR means that everywhere you go, you have the ability to save a life,” he said. “It doesn’t take long to learn, and there is truly no greater gift you could give.” 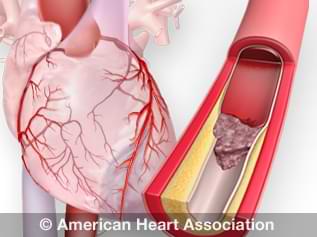